Today, Susan Greaney, from English Heritage, which manages the Stonehenge site, said they now believe that Neolithic people who built Stonehenge did not want to make “things as easy and quick as possible”.  Building the monument was as important as “its final intended use,” she added.  Many of the builders most likely participated in a kind of celebratory pilgrimage to help construct the monument.  This line of reasoning follows the discovery of a feasting site at the nearby Durrington Walls settlement (standing stones at the Durrington Walls site are pictured below) which appears to have attracted people from all over the country to help build Stonehenge. 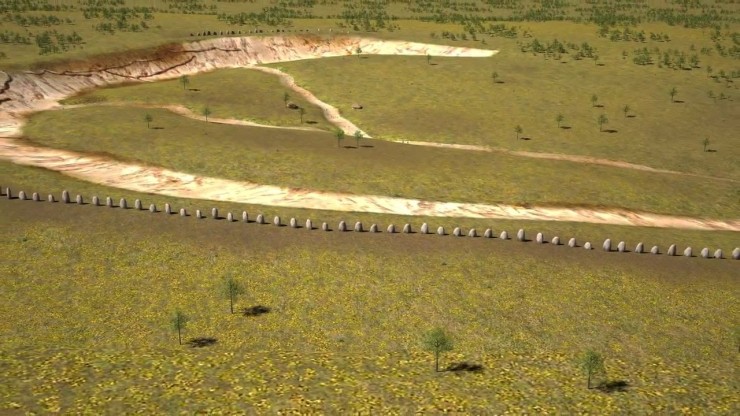 Historians think holding ceremonial feasts close to the Stonehenge site to celebrate the build “was potentially a powerful tool in demonstrating the strength of the community.”  This theory gets some support from a photo taken during a monolithic stone-moving ceremony on the island of Nias, Indonesia, in 1915. It shows people in ceremonial dress “revelling in the seemingly arduous task of moving enormous monoliths by hand.”  Festivities and celebrations most likely accompanied these events. 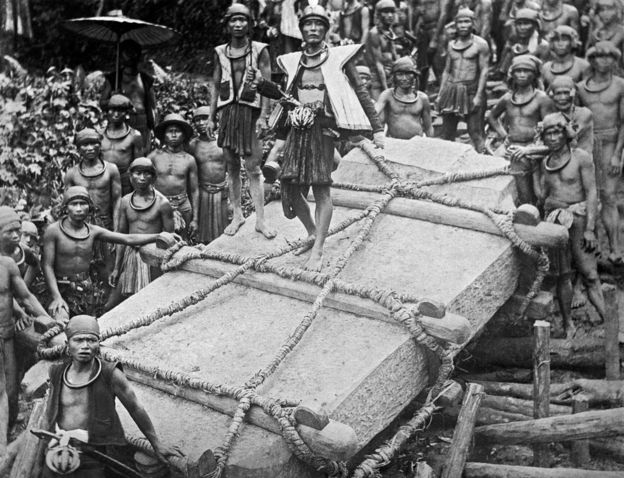 Ms Greaney adds: “As soon as you abandon modern preconceptions which assume Neolithic people would have sought the most efficient way of building Stonehenge, questions like why the bluestones were brought from so far away – 155 miles from the Preseli Hills in Wales – don’t seem quite so perplexing.”

In order to test the celebration theory, English Heritage began moving a replica stone today, using teams of volunteers in an “experiential archeology” project.  (One thing they don’t mention is how they will build in feasting and dancing!)

The bluestones were probably transported via water networks and hauled over land, using large numbers of people for the long and difficult journey.

The first monument at Stonehenge was, in part, a circular earthwork enclosure with a ring of 56 timber posts, built just over 5,000 years ago.  At the base of the timber posts were cremated human remains, indicating it was, in one sense, a cemetery.  This less than durable structure was replaced 4,500 years ago with the very durable large Sarsen stones and smaller bluestones – many of which we still see today at Stonehenge.

Most archeologists believe the Sarsens – comprising sandstone – were brought from the Marlborough Downs, 20 miles away. The Sarsens weigh on average 25 tons, with the largest stone, the Heel Stone, weighing about 30 tons.  The Heel Stone famously casts a shadow on a central part of the monument at dawn on the summer solstice (assuming in sometimes cloudy England, there is sunlight at this critical point!)

When we build Peacehenge, we will have some design elements that will be “quotes” from the original Stonehenge, meaning trilathons – two large vertical stones, topped by a lintel stone.   For at least one of the trilathons, we will use probable Neolithic techniques and technology to move the stones and erect them at the Peacehenge site.  And, yes, we will have a feast and dancing to encourage participation!  JT

One Reply to “The building of Stonehenge – part of a ceremonial celebration. Peacehenge will borrow this!”