Here is an updated design for Peacehenge by the artist, Colin Gray:

No need to travel to Britain to have a flavor of Stonehenge.   This version in Texas in not full size, but close to!  http://www.hcaf.com/stonehenge-ii/          JT

The BBC reports that a missing piece of Stonehenge has been returned to the site 60 years after it was taken.

A metre-long core from inside the prehistoric stone was removed during archaeological excavations in 1958.

No-one knew where it was until Robert Phillips, 89, who was involved in those works, decided to return part of it.

English Heritage, which looks after Stonehenge, hopes the sample might now help establish where the stones originally came from.

In 1958 archaeologists raised an entire fallen trilithon – a set of three large stones consisting of two that would have stood upright, with the third placed horizontally across the top.

During the works, cracks were found in one of the vertical stones and in order to reinforce it, cores were drilled through the stone and metal rods inserted.

The repairs were masked by small plugs cut from sarsen fragments found during excavations.

For 60 years Mr Phillips, an Englishman who now lives in retirement in Florida, kept his piece of Stonehenge – first in a plastic tube at his office in Basingstoke and later on the wall at home in the US.

In the 1950s he had been employed by a diamond-cutting firm brought in to help reinforce the giant stones.

The company, Van Moppes, bored three holes into one stone before stabilising metal rods were inserted.

During the process workers extracted three 1m-long (3ft) cores of stone and Mr Phillips took one of them.

But on the eve of his 90th birthday, he decided to return it.

Archaeologists hope to analyse the chemical composition of the core to try to pinpoint where the ancient Sarsen stones might have come from.

Although the sample was handed back last May, English Heritage said it had not announced the find until now as it had to first understand its significance.

The smaller bluestones at Stonehenge were brought to the site from the Preseli Hills is south west Wales but the source of the larger Sarsen stones is unknown.

The discovery of part of the missing core now means a team will be able to analyse it in order to “pinpoint their source”.

Researchers have already used a spectrometer to look at the chemical composition of the stone.

The whereabouts of the other two Stonehenge cores remains a mystery and English Heritage is appealing for anyone with any information to contact them.

Heather Sebire from English Heritage said “the last thing we expected was to get a call from someone in America saying they had part of Stonehenge”.

“Studying the Stonehenge core’s DNA could help tell us more about where those enormous Sarsen stones originated,” she added.

Prof David Nash from Brighton University, which is leading the study into the stone core, said it was possible the Sarsen stones came from multiple locations.

“Conventional wisdom suggests they they all came from the relatively nearby Marlborough Downs,” he said.

“But initial results from our analysis suggest that in fact the Sarsens may come from more than one location.”

The ancestors of the people who built Stonehenge travelled west across the Mediterranean before reaching Britain, a study has shown.  Researchers compared DNA extracted from Neolithic human remains found across Britain with that of people alive at the same time in Europe.  The Neolithic inhabitants were descended from populations originating in Anatolia (modern Turkey) that moved to Iberia before heading north.

They reached Britain in about 4,000BC.  Details have been published in the journal Nature Ecology & Evolution.

The migration to Britain was just one part of a general, massive expansion of people out of Anatolia in 6,000BC that introduced farming to Europe.  Before that, Europe was populated by small, travelling groups which hunted animals and gathered wild plants and shellfish.

One group of early farmers followed the river Danube up into Central Europe, but another group travelled west across the Mediterranean.  DNA reveals that Neolithic Britons were largely descended from groups who took the Mediterranean route, either hugging the coast or hopping from island-to-island on boats. Some British groups had a minor amount of ancestry from groups that followed the Danube route.

When the researchers analysed the DNA of early British farmers, they found they most closely resembled Neolithic people from Iberia (modern Spain and Portugal). These Iberian farmers were descended from people who had journeyed across the Mediterranean.

From Iberia, or somewhere close, the Mediterranean farmers travelled north through France. They might have entered Britain from the west, through Wales or south-west England. Indeed, radiocarbon dates suggest that Neolithic people arrived marginally earlier in the west, but this remains a topic for future work.  In addition to farming, the Neolithic migrants to Britain appear to have introduced the tradition of building monuments using large stones known as megaliths. Stonehenge in Wiltshire was part of this tradition.

We are grateful to a number of supporters for contributing to a fund for an artist, Nathan Snyder, to do a new site rendering of Peacehenge. Thanks, Nate for your work! Here it is! It’s a step along the way to a final design.   JT 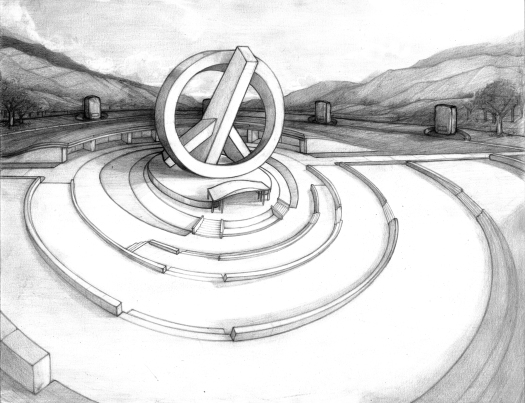 A peace deal between the government of the Central African Republic (CAR) and 14 rebel groups has been struck after talks in Sudan, officials say.  The deal was announced by the UN mission in CAR, known as Minusca, and the African Union (AU), which both sponsored the talks in Khartoum.  “This is a great day for Central African Republic and all its people,” said AU commissioner Smail Chergui.  The government said the peace deal would be signed in Bangui soon.   Details of the agreement have not been released and analysts caution that previous peace deals have all collapsed.  I have to say having a name like Smail Chergui has to make people sit up and listen!

On the other hand, the US and Russia say they are getting rid of a nuclear arms treaty signed in 1987 banning intermediate range missiles.  So, unless this is reversed in the next six months, we will be in a new chapter of the new cold war.  That does not take us in the direction of peace.   It also comes as the US has begun building its first long-range nuclear weapons since 1991, a move that other nations are citing to justify their own nuclear modernization efforts.

Often criticized for not doing enough, or being hamstrung by conflict on the Security Council, the UN does have a role to play in ending war, suspending war, and reducing conflict.  The battle in Yemen is a good example.

The UN envoy for Yemen, Martin Griffiths, recently headed up talks in Sweden between the warring sides – the government and the Houthi rebels.   I am heartened to see the UN playing this active role, and brokering a fragile peace.

Griffiths is British, and a veteran mediator.  He has also carved out a style of bringing women and other civilians to the same negotiating table as generals and warlords to explain exactly what bombs and bullets do to the children they are trying to raise in crater-pocked towns and villages.  Griffiths is the executive director of the Brussels-based European Institute of Peace.