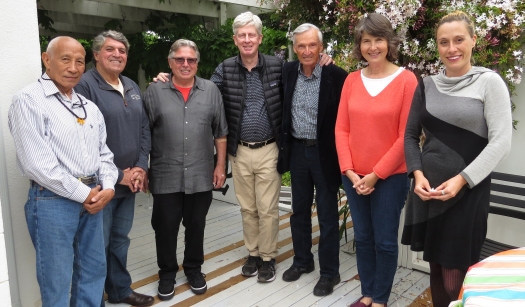 Peacehenge was incorporated as a California non-profit in March, 2018.   In May, 2018, the IRS certified Peacehenge as a 501(c)3.  EIN: 82-5063805.  Donations to Peacehenge are tax deductible to the full extent allowed by law.  You can support the cause of peace in a unique and powerful way by clicking here.

Message from the Founder:

People ask what is the origin of Peacehenge?   They say to me, what is your motivation for this project?  There are several strands to this, because to build and operate an artistic monument to peace, various themes are involved.   One is peace; other themes are art, design and architecture.

I grew up in Britain with a significant interest in art, especially ceramics, with my mother, Pat, being a ceramacist.  As a teenager, I started making ceramics myself, not just bowls and mugs, but more sculptural items, modeled on, for instance, the large heads on Easter Island.  My father’s mother, my grandmother, Jessie, was a landscape painter, especially seascapes.  She owned a shop selling dresses and hats, and painted on the side.  In the 1990s, while running a non-profit mental health agency in Santa Barbara, I returned to making ceramics, all sculptural in nature, much influenced by Barbara Hepworth, and Georgia O’Keefe.  In the early 2000’s I started producing abstract and conceptual art – mainly acrylic paintings – and in 2011, co-founded an art association, with architect Thore Edgren, for contemporary artists, called the Abstract Art Collective, which today is a thriving association with several shows a year in the Santa Barbara area.

In addition to being an artist, I have for many years been fascinated by public monumental art, and the relative scarcity of it.   How is it our ancestors in the Neolithic and in pre-industrial societies built the pyramids, Stonehenge, Angkor Wat, and Machu Picchu?   Do we have anything modern that has both magic and a grand scale?   Maybe Frank Gehry’s architecture has these qualities – for example his Guggenheim art museum in Bilbao, Spain, or his Disney Concert Hall in downtown Los Angeles.  But when the Getty Foundation had an enormous amount of  money to build a new gallery complex in Southern California, they created a bunch of Costco’s glued together on a hill.  Oh dear!  And so we still have the impoverished Hollywood sign as the best thing to call monumental art in Southern California.   And we appropriate the Golden Gate bridge as monumental art in Northern California.   Is there anything remotely modern in Britain we might refer to as monumental art?   Big Ben?

So idea number one is to build something monumental, magic and compelling.   A caveat, Peacehenge is not going to be on the scale of Angkor Wat or Machu Picchu.  Stonehenge is actually a relatively small monument, but it has a commanding and magical presence, and sits on Salisbury Plain, a large grassy plinth, if you like.   Peacehenge will be similar in scale.

Idea number two is peace.  I come from a family with roots in advocacy for peace.  My uncle Geoff, married to my father’s sister, Mollie, declined to fight in World War II.  He was a conscientious objector.   Instead of fighting, he worked in Britain with orphans of the war.  Then after World War II, he drove an ambulance in Belgium to support the victims of war.   After Geoff died in the 1970s in his early 60s, my aunt, Mollie, became a Quaker, and was the main liaison between English and French Quakers.  In the 1990s, I myself became a Quaker, attending meetings in Santa Barbara.   One of the central tenets of Quakerism, a religion founded in England in the mid 1600s, is the advocacy of peace and non violence.

Going back to when I was a teenager at a boarding school, Oakham, in Britain: we had when I was 16, an inspiring teacher of English Literature, Mr. Smith, who was much interested in the poetry about World War One, particularly that of Sassoon and Owen.  Wilfred Owen has haunted me ever since, particularly a poem he wrote called, ironically, Dulce et Decorum est.   (This is part of a quote from the Roman poet, Horace, “It is sweet and fitting to die for one’s country.”)  Sadly Owen was killed in battle just a week before the war ended, with the Armistice on Nov 11th, 1918.  He was just 25 years old.  His poetry is about the gruesome and diabolical tragedy of war experienced as a senseless river of death.

Can we find ways to deal with conflict and aggression without resorting to mass killing?

I am also a psychotherapist, and am interested in all levels of peace – inner peace; peace in families, peace in neighborhoods, as well as peace between political regions and countries.   My academic training includes master’s level degrees in clinical psychology and social anthropology, the basis of my interest in the psychological underpinnings of what makes a healthy and peaceful community.

Translated into this project, how can we manifest peace in a monumental way?   We build a monument to peace, making it clear who the heroes of peace are, now and through the ages, and creating a center for peace studies: a place where we can advance our experience of, and knowledge of peace.  Archaeology tells us the neolithic people who made Stonehenge were largely a peaceful people.

The world is full of war monuments, to memorialize all the blood that has been shed in all the wars we have fought.  Imagine taking a war memorial, turning it upside down, and shaking out all the tragedy – that is Peacehenge.  It is about avoiding and ending violence and war.   It’s a monument about optimism, about celebrating the human spirit in a state of peace, in a state of bliss.